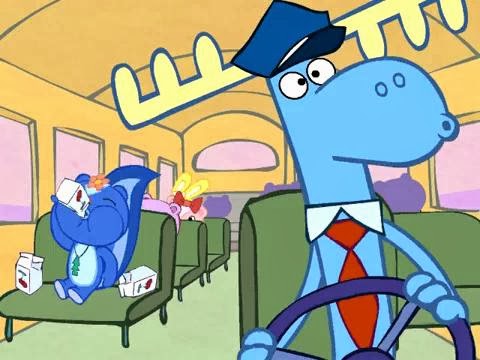 What is dopamine? What, for that matter, is a neurochemical (or neurotransmitter in this case)? Let's do a brief refresher from Neuroscience 101.

You have billions and billions of these: 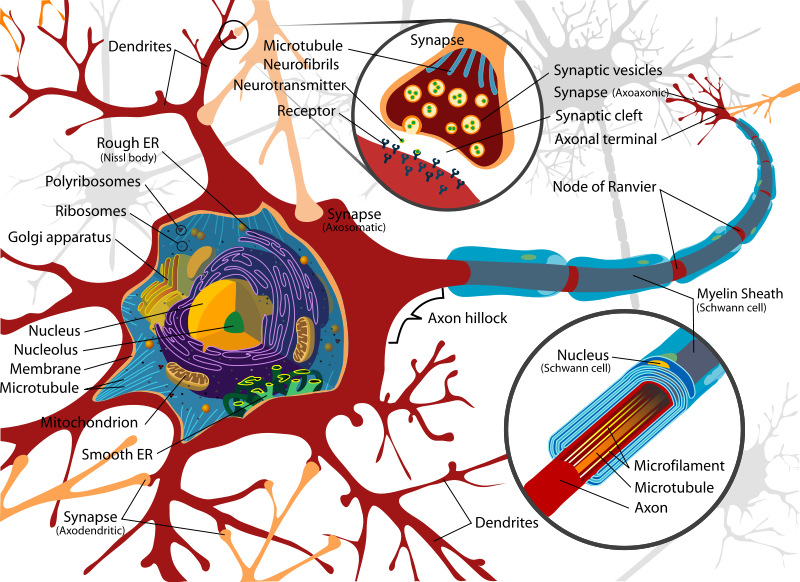 Neurons, as you'll recall, store your "data" (memories, information and so on). You'll see axons and dendrites there as well. Axons pass on information to other neurons and dendrites are on the receiving end. At the junction of an axon and a dendrite you have a synapse (and recall that you have somewhere around a hundred and fifty trillion synapses). A synapse looks like this: 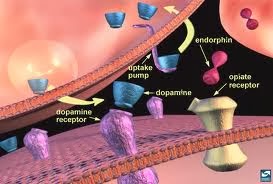 That's somewhat simplified of course but I can assure you that it is a complicated piece of business, a business that takes place over trillions and trillions of synapses in your brain trillions of times per second for every minute that you will draw breath in your lifetime. The business we're talking about is the transfer of signals from neuron to neuron throughout a given pathway. In other words, if these transactions don't take place, then the information from any given set of neurons isn't "brought on board" whatever it is "you" are trying to do. These ridiculously fine transactions (a synaptic cleft is only about 20 nanometers across and the neurochemicals themselves are very fine indeed) govern a massive amount of brain activity which in turn governs "you".

So that's a neurotransmitter and dopamine is just one such transmitter of about a hundred but, as we'll see, it's a very major one when it comes to animal and human behaviour. Let's review the dopamine pathways. They look like this: 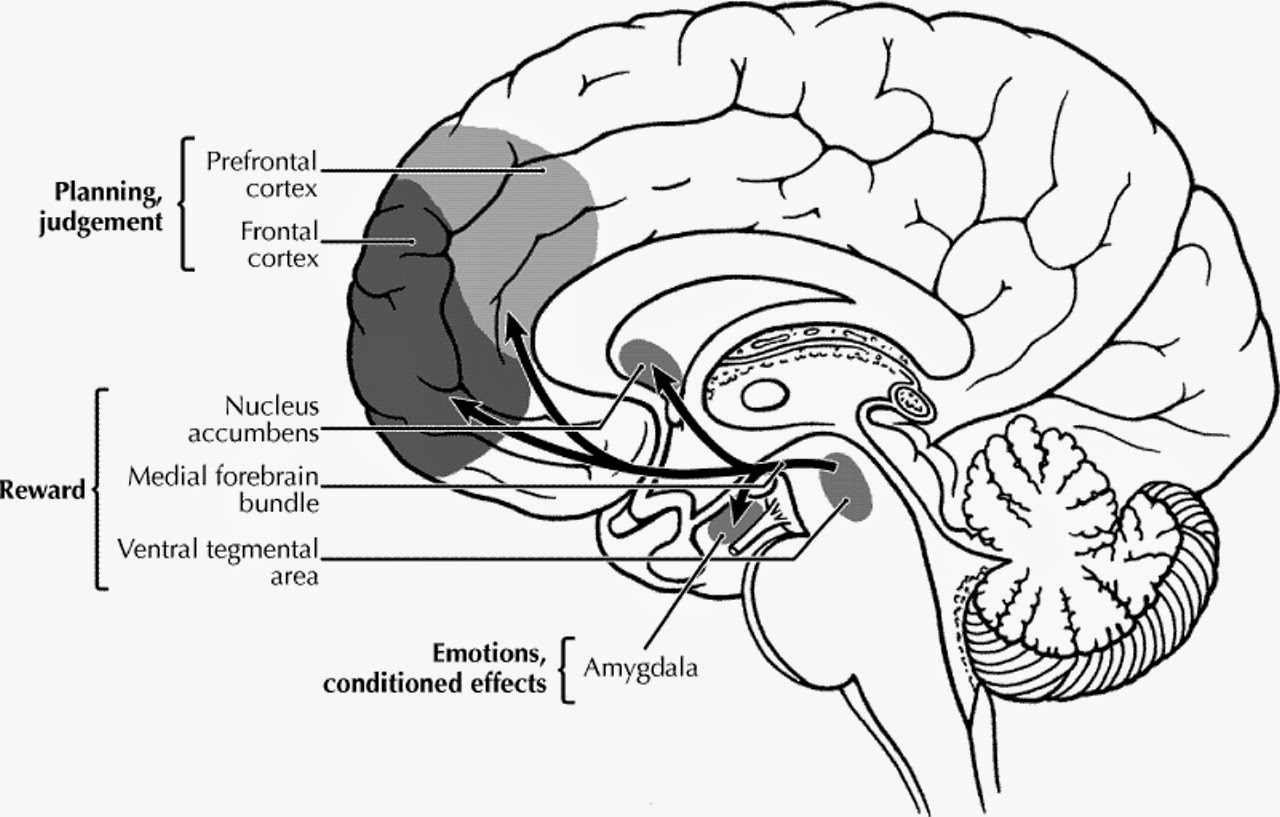 We briefly touched on that in Neuroscience 101 and now it's time to look at it in a little more detail. Dopamine originates in the Ventral Tegmental Area, a small nodule in the limbic system . The limbic system lies between our more elementary "lizard brain" brain stem hardware and our more highly evolved cortex area. The VTM's job is pretty elementary and it acts in accordance to messages from other more prominent parts of the limbic system. Aside from very advanced practitioners of meditation (whom we'll look at in a fascinating future post), this part of our brain is quite "off limits" when it comes to our conscious control. There's a potential kind of "back door" access to the VTM - aside from meditation - that could initiate a modicum of control but we'll touch on that at the end when we look a bit more at dopamine's complete circuit. (correction notice)

From the VTM, the circuit heads to that little bit of hardware that seems to come up in every discussion on human behaviour, the amygdala. We looked at this highly influential little brain nodule in the previous post and examined a bit how much power it has over our perceptions of and reactions to the outside world, and hence our behaviours. We established then that the amydgala is a major driver of our actions. So if the amygdala is a big part of our actions and dopamine is a part of what drives that, then dopamine is part of what controls a very deep part of who we are and what we do.

Another key destination is the nucleus accumbens. Research has indicated that this nodule (of which there is a left and right in the respective hemispheres of your brain) has an important role in pleasure; including laughter, reward, reinforcement learning, as well as fear, aggression, impulsiveness, addiction and the placebo effect. So again, we see dopamine plays a role in a key region of many of our most human attributes (as well as those in animals; we just take those to higher and more sophisticated levels).

You can see that the end destination of dopamine is the frontal and prefrontal cortex. As I mentioned in Neuroscience 101, if you want to know where "you" are, it's believed by some neuroscientists to be "there" (though recent evidence now puts this in some dispute). It is also in these areas that we experience theory of mind, the uniquely human abilities involved in such things as understanding how others are thinking, our predictive powers and so on. This is, if all goes well, what makes us "human". As well, you can see it's these areas that are responsible for things such as planning and judgment (something we touched on in two different case studies in the previous post). As dopamine is a major influence on what goes on in there, in order to better understand human behaviour (or your pet's behaviour for that matter) and because the neuroscience of human behaviour is the whole point of this blog, we'd better look at this much closer.

The dopamine system is very often referred to as our "reward system". So let's examine a bit about what's meant by that.

As I said in Neuroscience 101, dopamine is one of the most widely studied and understood brain systems in neuroscience and there is little doubt as to what forces it has over animal and human behaviour. Dopamine is very strongly implicated in such basic human and animal drives as motivation, pleasure and euphoria, the fine tuning of motor function, and perseveration. We'll look at just motivation and pleasure today.

Feeling motivated? Feeling "turned on" by what you do? Feeling "driven"? That's dopamine at work in your emotional centre and in your planning and judgment centre, the frontal and prefrontal cortex. Not feeling those things? That's dopamine not working so well (for reasons we'll touch on at the end). The same with feelings of pleasure - that's dopamine telling "you" that whatever you're doing, it feels "good" which is why dopamine is a major part of our sex drive. The pleasure you feel in sex is derived in part, though not all (we'll examine the other factors in a later post), from a dopamine "hit". Dopamine also can - emphasis on can - keep you motivated to keep seeking sex (often to disastrous results). Why it sometimes doesn't is something we have to leave aside for that later post.

How much does dopamine drive our motivations and pleasures? Robert Sapolsky is a world wide recognized leading expert on dopamine and behaviour so I'll let him tell it. As Sapolsky explains;

dopamine levels increase as soon as we start anticipating a reward. Once the dopamine starts flowing, monkeys and people will work and work and work in expectation of receiving a "treat" at the end of their toil. For monkeys, the anticipated reward can be a grape. For humans it can be a pair of sneakers, a shiny car (you'll recall the example I gave in Neuroscience 101 of a "decision" to buy a new car), an MBA that might lead to a high-paying job, early retirement, a couple of minutes of entertaining diversion, a few seconds of sexual gratification, or the promise of eternal salvation.

A brief five minute video of Sapolsky explaining this in slightly more, and very fascinating, detail can be found here.

I've said that there are parts of neuroscience that are well known and parts that aren't so well known. The dopamine reward system is very much on the known side of the ledger. Literally thousands of experiments and studies done over very many decades on all manner of animal and human research subjects have very thoroughly cemented dopamine's role in our behaviours. As our dopamine system is indistinguishable from that of rats, cats, dogs, primates (or moose as my humorous lead image shows) and so on, researchers can see that our behavioural drives are not all that different from, for example, a rat driven to go through great lengths to press a lever again and again to receive a reward. What's fascinating (and which Sapolsky explains in the video) is that this drive increases when "maybe" variables are introduced. Which is literally what keeps the city of Las Vegas in business.

But while we may share a dopamine drive with the average lab rat (and all other mammals), human brains have some additional hardware, that being our vaunted frontal and prefrontal cortexes which is why we're (probably) not going to be motivated by a grape or a bit of rat food like our lower mammal cousins are. It's these so-called regions of "control" that keep us going like rats on a wheel in pursuit of things like sneakers, cars, degrees, trophy wives (or husbands) and all our other "higher" human desires.

So when we're driven to acquire something - be it an object of desire, money, a sex partner (or companionship) - dopamine is a very large part of what's going on and your drive to achieve goals in life, if it's functioning "normally", is your dopamine reward system.

But the dopamine system is a "blind robot" so to speak. It has no sense of judgment. Hence it will drive you to achieve virtually anything. Which is why dopamine is highly, highly involved in virtually all addictions (including your shop till you drop addiction, ladies, or your manly pursuits, gents). Not only does it have no innate judgment, it impairs yours (as witnessed by its influence on your judgment and planning centres in your brain).

Is our "highly sophisticated" efforts of planning and judgment merely at the behest of a simple, autonomously running neurochemical? Dopamine won't have complete control - there are other factors - but enormous amounts of research indicates that it does indeed play a major role. This is what I mean by saying we don't really "drive our bus". That all happens in regions that are not only below our conscious awareness but well below our levels of control.

We're running up to the end of our time today so we're going to have to leave our look at dopamine and addictions of all kinds for the next post.

Now, I said that there was a "back door" access to the VTA from which dopamine originates. This suggests that there is a modicum of control that we may have over our dopamine system (and thus "us"). This comes from the fact that the reward centre is not strictly an "A to B" road, but one of a loop of output and input. Inputs come from areas it affects and for an idea of how much control this may have, and thus what you may have (as I promised), we have to look into the human species' "social brain", the most highly evolved such area in the animal world. I also said we'd look at why we're sometimes under-motivated and why dopamine may not be "floating your boat". It's a bit complex and a little dicey to explain, but we'll have a go at it. But that, my friends, is for another day. First, however, we're going to look more into dopamine and addictions in another post of case studies coming up in the very next post.

Correction notice: I initially incorrectly said that the VTM is located in the brainstem when in fact it is part of the limbic system. My apologies.

Too many to list at this time, virtually all of them scientific research papers like this one.The works of Sapolsky are a good place to start for further reading. As always, I have to thank Robert Whitaker, his works and his encouragement over the time I've known him.