A Review and Some Other Thoughts 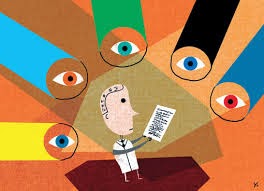 One of the beauties of presenting learning material in blog form is that blogs can be interactive and the presenter can adjust the presentation on the fly depending on that interaction. For instance, after the opening three posts of this blog I got some valuable feed back. One reader had some very good questions that gave me some valuable insight into how the material I'm presenting is being perceived and another reader felt that the “basics” in Neuroscience 101 were pretty advanced. So now I can adjust my “course” accordingly. In my opening post I said I was a good teacher and gave the reasons.

Bearing in mind some of my feedback, it's probably a good idea to review some of the key points of the previous post before we go on.

The brain is made up of a few key components which we looked at in the previous post. Neuroscience doesn't refer to them as components but we'll use that term for now for simplicity's sake. I'll also refer to them as the “ABCs” of neuroscience, or in other words the basic building blocks of the common language we need if we are going to learn and discuss the brain and human behaviour. I said in my introductory post that there is much that is known about the brain and there is much yet to be discovered and understood. The following is of the known variety. This is all beyond any shadow of a doubt. The key components are:

In our brain anatomy primer series we'll look at all these regions and components in a little more detail and learn more about what they do and how they're all cobbled together to make “you”. It is each our own individual arrangements of these six components and how they interact that is responsible for all of our behaviour (or the behaviour of any animal as we'll see when we look at basic brain structures and what they do).

How all these regions develop themselves and function depend on two other basic things; genetics and environment. Genetics are, basically, the DNA code you were born with. Environment is everything your five senses detect from the time you were in the womb. As you have zero control over the former and next to zero control over the latter, you kind of have had next to zero control over who you currently are. I qualified that statement with “currently” so that you'd not lose hope that you have at least a smattering of input into your “destiny” (1). Trust me, you'll be very interested in the amount of “control” you do have so you're going to want to pay rapt attention as we go along. Knowing what you cannot or potentially (much emphasis on potentially) can control will save you and others a lot of grief, frustration and wasted time and energy. I'll be sure to let you know when we get to those points so that you can stop snoozing, sit up straight, sharpen your pencil and take some notes (no, as much as you'd like to know these things now we're not ready to get to those just yet. Trust me, it would do you little good if you didn't understand how the ABCs work).

Who “you” are or who any individual is – for better or worse – is sort of a “more than the sum of the parts” of how those basic components came to form and function (as dictated by genetics (nature) and environment (nurture). Yes, there is something to the nature versus nurture debate after all. While the debate still rages, we'll see that neuroscience is providing all the answers once and for all. All the six components I listed operate autonomously, quite beyond your “conscious” control (and we'll see why this is a Good Thing. We'll also see why this can sometimes be a Bad Thing). These are parts of the “zombie programs” as neuroscientist David Eagleman calls them. Also, as we go into more detail about these autonomous systems, we'll understand what “subconscious” currently means. Neuroscience has a different way of looking at it than did the pioneers who first discovered the concept and gave it that name (Freud, et al).

ALL human behaviour originates in how these brain regions were formed and function together (or not function together). This will be very exciting so be sure to put on your Sherlock Holmes outfit. There'll be many mysteries solved here.

The human brain (or any brain for that matter) did not just pop out of the oven as is. It evolved to be what it is (and is of course still evolving. It's not like there's an “end point” to evolution. Well, that's not true either. The sun will burn out in a few billion years and that will be the end of that (unless we master inter-galactic travel and living by then)), a process that took billions of years and a lot of what we'll call “trial and error”. Knowing this, it is impossible to learn and discuss neuroscience without delving into evolutionary biology and the various disciplines of evolutionary science. Human behaviour, the brain, and evolution are so tightly wound together that is it literally not possible to understand “us” without examining the three all together almost as a single entity. So yes, I'll be weaving the facts of evolution into our look into our Inner Galaxies. No worries! It'll be fun! (no drab, dry lessons in my classroom)

Again, I said that some things about the brain were known and some not so much. Everything I've listed and told you here is very – and I do mean very – on the known side of the ledger. Yes, I know how distressing it is to learn that you have next to no control over who you are and what you'll do in life but … well, hang on.

The big question in neuroscience (and philosophy) are the twin notions of “free will” and “consciousness”. These are on the not completely known (or agreed upon) side of the ledger. What is known and quite widely agreed upon by the top neuroscientists and related philosophers (we'll see that there's actually quite a bit of crossover) the world over is that if either exist (and many firmly assert that neither do and not, as we'll see, without very solid evidence), it's not very much. We'll see that the “conscious you” - the you that opens your eyes and “sees” the world and experiences “thought” - is more or less a passenger (or perhaps the captain) on a very large biological ship (IE: your brain) that navigates through what will be your time on planet earth. Hey, I did warn you that this trip through your inner galaxies would at times be scary (and by scary I mean disturbing and distressing). But don't worry, there's an “app” in your brain to deal with that (which has already been put on alert and spun into action without you needing to give it any direction. We'll be looking into what we sometimes call “bullshit detectors” in fascinating detail and why, if yours is firing now, it's wrong. It's often wrong so don't worry. At any rate, it'll help deal with any distress you're experiencing). Like you, I believed in “free will” and consciousness and soul but once I understood how a brain works and what's understood about brains, I could see that my previously held notions had nary a leg to stand on. So I get how you feel.

I also touched briefly on “reality”. It is necessary to tie this concept into free will and consciousness. It is also extremely well studied, understood and agreed upon by neuroscience that your unique brain (remember, there's only one like it; not only on the current planet, but in the history of the planet) constructs everything that you perceive as “real”. By real, I don't mean whether a tree is a tree or a rock is rock and all that other nonsense that people get into splitting-of-hairs debates about. We can measure those things with instruments and objectively agree on what they are. However, reality as you perceive it is a very fuzzy concept but about which we must all understand more. So, as your brain is the only one like it in history, your “reality” will be the only one like it in history. Cool, eh?! But here's the fly in the ointment – it's all of these individual homo sapians' different realities that give rise to all human conflict. So, as you can well imagine, it's kind of important that we understand this concept. But don't worry, there are ways we can get our realities to converge more and, as we'll see, how they at times spontaneously converge (a very cool concept known as “collective consciousness”).

I need, before we go too much further on in our series of lessons, to further establish and defend my position that neuroscience is the best tool we have for understanding human behaviour but I am approaching my word limit for a single post and I can see your attention span is wavering for now.

Again though, this is the beauty of blogs. We don't have to tackle too much at once. We can take them in bite size pieces one or two times a week. And yes, I know, some of you will be swallowing these bites easier and for some these bites are going to require quite a bit of chewing. For the latter, it'll all be worth it, I can assure you (but don't worry, if you let it, your brain itself will do most of the chewing for you without “you” having to do anything! Just wait until you learn how this works!).

(1) – the whole concept of “destiny” is one we're going to thoroughly turn on its head. For now, just know that everything you've likely learned about this concept (unless you're already highly advanced in neuroscience or related philosophies) is all rubbish, the stuff of past mythology, and needs to be set to the curb (or kerb depending on where in the English speaking world you live). Yes, I understand how dear these myths likely are to you and to whatever culture you reside in, but trust me, you'll thank me for this. It's all part of understanding “human nature” and reducing our conflicts so this will be highly worth it as well.

Rita Carter's The Brain Book and Mapping the Mind

Various Daniel Dennett and Richard Dawkins over the years

Various neuroscience research papers too many to mention
Posted by Bradley Esau at 6:19 PM